Alright, I must confess I am a self-proclaimed foodie, and from time to time, I binge-watch YouTube’s food channels.

Every culture has its cuisine steeped in history. The bond of a food tells interesting stories about the people, and it fascinates me.

Food-hunters existed centuries before YouTubers began filming their food explorations. In the past, these people were either adventurers or botanists, and some may even be well-known personage like the 3rd President of the U.S.A. Besides writing the Declaration of Independence, Thomas Jefferson famously introduced French fries, ice cream, and Mac ‘n’ Cheese after returning from his five-year stint (1784-89) in France. He was also known to have cultivated and promoted the then very unpopular tomatoes, making them a success in America. Today almost every American kitchen has a bottle of ketchup. We are all familiar with American fast-food, Chinese dim-sum, Japanese sushi, and many more national and ethnic foods that have travelled far beyond their original shores:

While having our meals, we may feel helpless about the conflicts, the wars and other world challenges around us because we think there is little we can do as individuals. If we were to overlay 24hrs in the earth’s history, which was formed about 4.6 billion years ago, human lineage only appeared about 5 million years ago; and modern Homo Sapiens are between 200,000 to 500,000 years old, i.e. our existence is about < 0.01% (which is about the last 6 to 9 sec) of the geologic timescale. Indeed, every one of us seems so insignificant in the big scheme of things, yet everyone has a part in it.

We can answer the call of the UN for the International Day of Friendship. We can make a conscious effort to build and celebrate friendships with people different from us, regardless of race, nation, religion, societal background, etc.: Through friendship — by accumulating bonds of camaraderie and developing strong ties of trust — we can contribute to the fundamental shifts that are urgently needed to achieve lasting stability, weave a safety net that will protect us all, and generate passion for a better world where all are united for the greater good.

Pick up a few dandelion puffballs (each has ~150-200 seeds); blow them into the field. Out of the many, there will surely be some that will blossom into new bright dandelions, carrying our hopes for a better world!

Every step we take as individuals shall steer humanity into its next chapter, just like every fraction of mini-second moves the clock’s hands to the 24th hour! Leverage the soft-diplomacy power such as our love for foods, sports, or hobbies we find fit to forge a cross-cultural friendship – one person and one step at a time.

Your stories, my stories and ALL OUR stories together make up the canvas of humanity!

“Have fun spreading the friendship puffballs in making the world a better place!”

PrevPreviousThe Commonwealth of Nations: An Epitome of Diversity and Inclusion
NextSwiss National Day – August 1, 2022Next 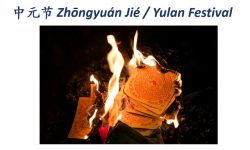 August 11, 2022 No Comments
Chinese Ghost month is the seventh month on the Chinese Lunar Calendar and occurs from July 29 to August 26, 2022. Ghost Month is when the spirits of Chinese ancestors roam among the living. The Chinese believe they must respect and entertain their ancestors during their stay. If you do something that may attract or…

August 10, 2022 No Comments
Indonesia Independence Day is a holiday celebrating the country’s freedom from the Netherlands. Their Independence Day is on August 17 and has been celebrated since 1945. The holiday was created when Queen Juliana of the Netherlands granted Indonesia independence. After 300 years under Dutch occupation, they finally celebrated their country’s freedom.  The holiday included many…

August 2, 2022 No Comments
This August 9, 2002, Singapore will celebrate its 57th birthday- its independence from Malaysia. A traditional National Day Parade (NDP) will be held at The Float @ Marina Bay on August 9. Before the parade, there will be other entertainment that will encourage people to gather early. These activities include sky-diving, choir presentations, band performances,…

August 1, 2022 No Comments
We always think we know it all, yet there will always be something new. As I researched and composed this month’s newsletter, I discovered some fun facts about several countries I thought I knew. Let’s see if the answers to these five questions are new to you too: Q1. Do you know that owning only…

July 29, 2022 No Comments
Swiss National Day, celebrated on August 1, is the country’s national holiday. Although the Swiss Confederacy was founded on this date in 1891 and has been celebrated annually since 1899, it has only been an official holiday since 1994.Switzerland is a mountainous Central European country boasting several surreal lakes, villages, and the majestic Alps peaks.… July 4, 2022 No Comments
Alright, I must confess I am a self-proclaimed foodie, and from time to time, I binge-watch YouTube’s food channels. Every culture has its cuisine steeped in history. The bond of a food tells interesting stories about the people, and it fascinates me.